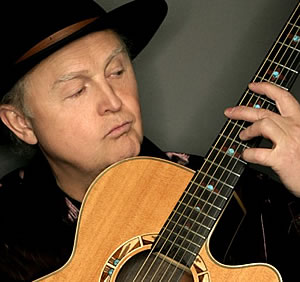 Born in 1944 in rural Alberta, Bill began playing the guitar when he was about 13 or so and celebrated his 15th birthday while on the road with a band. Since then he has toured the world playing and writing all styles of music from jazz to classical and is one of the most sought after arrangers of symphonic music in Canada. In 1971 he moved from Calgary to Toronto and began working with some great local and internationally acclaimed musicians: Howard Cable, Guido Basso, Hagood Hardy, Peter Desotto, Red Norvo, Art Van Damme, Phil Nimmons, Peter Appleyard, Lenny Solomon, New Music Concerts, and many more. He has recorded jingles, CD’s, movie scores, tv and radio broadcasts, and has worked in orchestras playing for theatre shows and for such artists as Ella Fitzgerald, Peggy Lee, Petula Clarke, Eartha Kitt, Vic Damone, and Tony Bennett, to name a few. He toured with Lena Horne for several years. Miss Horne said, "He plays so pretty I want to stop singing and just listen". He was John McDermott’s musical director and guitarist for many years and has appeared as guest soloist with several symphony orchestras. Bill finessed his string writing skills while with Quintessence - a string quartet with an added guitar.

He still writes, records for, and performs with: trio Norte, Bowfire, Quartetto Gelato, Dadawa, The Done Me Wrongs, Jazz Epicure, Allyson Morris, Kelli Trottier, Ron Korb, and George Gao. For a number of years he has been a member of The Shaw Festival Orchestra and often travels to Ottawa to play with The National Arts Centre Orchestra. Currently Bill is in collaboration with Lewis Mele in the development of Bridges, a guitar and bass duo, as well as writing for and playing banjo and guitar with the Wintergarten Orchestra - a group dedicated to playing music from the 1920's and 30's. Recently he co-produced Tom Leadbeater’s latest cd and played in the pit (as well as an on stage accompanying flamenco dancer Fernando Mira) for Strictly Ballroom. Bill intends to continue his musical life as a freelance composer/arranger/performer for many years.

They’re all here – Alice, the mouse, the rabbit, the caterpillar, the cat, the mad hatter, the march hare, the king and the queen... and it is indeed a wonderland.