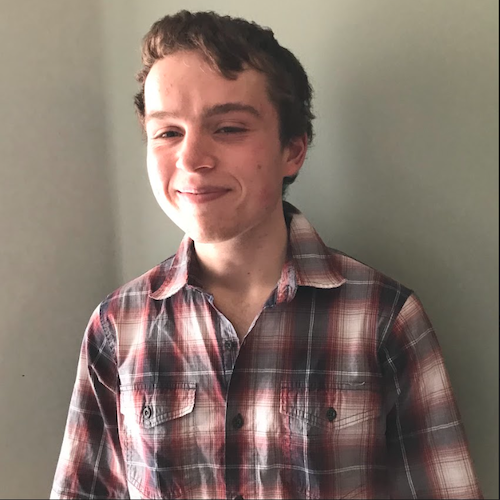 In 2022, Jack Ian Dimou graduated from Eastview Secondary School with the Michael Clipperton Award for his contributions to the arts. He had previously taken part in the NTS Dramafest with Eastview twice, having an ensemble role in the 2019 coming-of-age story Boxes and playing Jeb Lynch in the award-winning 2020 social thriller Best Kept Bottled. When COVID-19 forced him and the rest of his drama class into online learning, he quickly learned the ropes of virtual acting; the 2020-2021 school year had him playing Vladimir in Jeffery Harr’s Virtual Support Group from Hell, Bingley and Wickham in Treanor Baring’s Pride and Prejudice, Completely Zoomed and Colonel Brandon in Baring’s Sense and Sensibility, Completely Zoomed. In addition, as part of his Specialist High Skills Major program, Jack took part in a virtual reading of Tomas Ketchum's historical drama Green Skies early on in the play’s development. He had also taken part in many live shows with the Eastview Concert Choir, including a performance at Sainte-Marie among the Hurons' First Light event in 2019. Jack’s work onstage is not confined to his high school experience; long before high school, he was a member of Vivo, a boys' choir put together by Janet Kinsey. He has performed at many of Janet's alumni concerts as a choir singer, soloist and pianist. In the summer of 2021, he took part in Talk is Free Theatre's production of Stephen Sondheim and James Lapine’s Into the Woods, directed by Michael Torontow. He has taken part in theatrical workshops both inside and outside of school with the likes of Leah Holder, Joe Pagnan and Richard Varty, and has helped workshop many plays at Theater by the Bay's Theatre Labs. Recently, Jack has been developing his skills as a writer; his main project at the moment is a musical adaptation of G. K. Chesterton’s metaphysical satire The Man Who Was Thursday, which he has been working on since 2021.