When We Were Singing investigates the friendships between four urban-dwelling lost souls. Set around a series of conversations between these friends, we eavesdrop on the ups and downs of their lives over the course of a week-end. Work, loves, hopes, dreams, fears, failures – the story is pulled from the same source as our own lives. When We Were Singing switches gears in an instant to get at the heart of what makes people tick. It’s a musical like few others."

Notes
Three women, one man – early to mid-thirties. These characters are getting to a stage where some serious life decisions are needing to be made. This is not a dance show, it’s all singing. Tenor male, all three women need good range.

A documentary film maker, earnest, intense, still recovering from a bad breakup, a bit self absorbed, a bit neurotic, funny.

An actress, successful but beginning to see some changes in the landscape as she gets a bit older. Comes from money but has none herself, a diva, presents as confident and carefree, attractive to everyone, the fearless leader of the group.

Commercial actress, successful but wishes she had Abbey's success on stage. She has no romantic attachments and hasn't for a long time, loves Les, loves the group, drinks heavily and is at a critical moment in her life - quit drinking? Accept her limitations, be happy with the career she has?

An one time actor now a full time waiter, stuck in terrible grief and loss, seemingly unable to move forward, also a heavy drinker and also a critical moment - to move out of this grief or to stay stuck. Beloved by the women in the group he is equally dependent on them.

Piano or piano/bass. Was created for a minimal accompaniment but can certainly be enlarged. 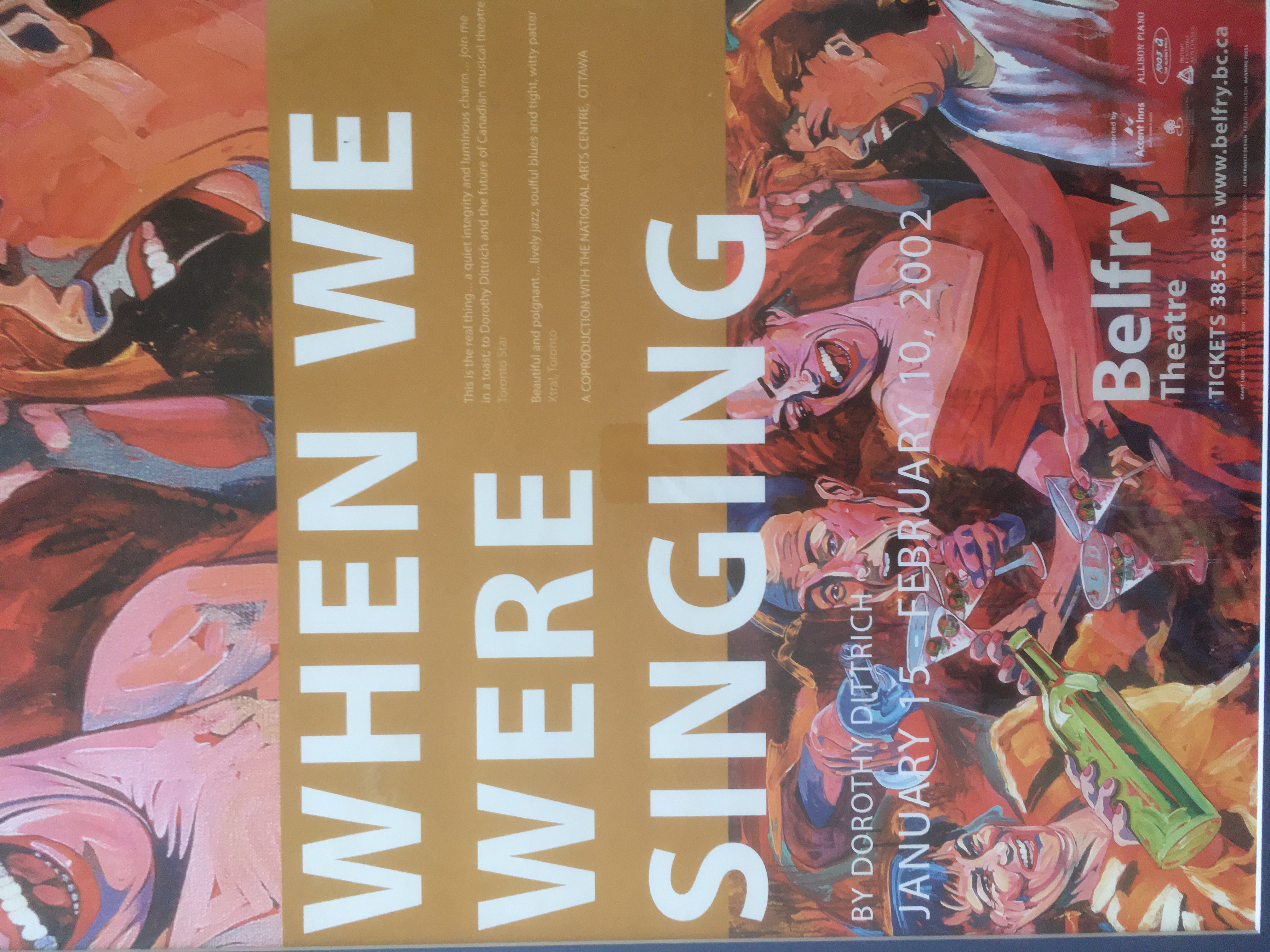 A musical about love, friendship, urban life and what it means to be human.

Book
Dorothy Dittrich
in development
Share
When We Were Singing

"When We Were Singing doesn’t have shock cynicism or confrontation, what it does have is compassion and understanding. It amused me, it moved me and I like it a lot. When We Were Singing has a quiet integrity and a luminous charm that makes you care about the four lost souls up there on the stage…"
Richard Ouzounian, The Toronto Star

When We Were Singing was first produced by Vancouver’s Touchstone theatre then went on to Buddies in Bad times in Toronto and a co-pro between The Belfry in Victoria and the National Arts Centre as well as The Suncoast Theatre in Florida. It was listed in the year’s top ten shows in all locations, it was nominated for 7 awards, (Vancouver’s Jessie Richardson and Toronto’s Dora Awards) winning Jessies for Outstanding Original Script, Ensemble Cast, Musical Direction and Best Production. It was given a workshop by MTC in New York in 2003. At the time it was produced, gay and lesbian leads would have been fairly rare in a musical and likely the musical would have been largely about their sexuality. This musical presented the gay and lesbian characters as part of the fabric of life. The fact that the musical had gay and lesbian characters but was not about being gay or lesbian set it apart. It’s a story about friendship, love, urban life, connection, isolation, grief and loss – in short it’s a musical about being human. It’s a musical that everyone can relate to.

The Best of Friends
Opening number, Full Cast
When We Were Singing
Solo - Les
The Middle of the Night
Duet - Abbey and Jenny
Casting infoorchestrationlicensingproduction historyAvailable Sheet MusicSocial Media/website